July 11, 2016 – Vancouver, British Columbia - Candelaria Mining Corporation (“Candelaria” or the “Company”) is pleased to announce the completion of a mapping and sampling program of historic underground workings at its gold-silver Pinos Project located in Zacatecas, Mexico (the “Project”). The Company also announces the commencement of a 30- hole, 4,500-metre core drilling campaign on the Cinco Estrellas portion of the Project to test the down-dip potential of the Cinco Estrellas vein below historical workings.

The underground sampling and mapping program was undertaken to provide a detailed understanding of vein geometry and to confirm gold and silver values from previous sampling and historical mining.

More than 900 underground rock-chip channel samples were collected. Of the 97 underground samples that the Company sent to ALS for gold and silver analyses, 28 samples assayed > 5 ppm Au and 13 samples assayed > 100 ppm Ag. The highest values reported by ALS were 91.9 ppm Au and 561 ppm Ag. ALS’s gold and silver assay results for the 65 samples that assayed more than 5 ppm Au are presented in Table 1.  The areas of underground sampling are shown in  Figure 1. The rest of the underground samples were analyzed by the Company’s in-house laboratory, which showed results consistent with those returned by ALS.

A QA/QC system is in place to assure reliability of assay results. Standard pulps of known concentrations of gold and silver, blanks, and duplicate samples are inserted into the sample stream every 20 samples. Standards and blanks allow for control of quality of assaying and sample preparation. Duplicate samples (a second split of the drill-core assay interval) gives an indication of the homogeneity of the assayed sample. 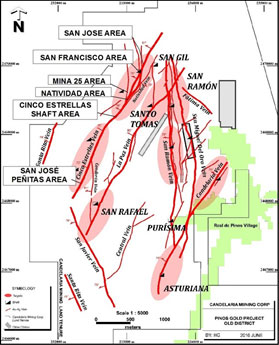 The Pinos district is part of a regional trend of precious-metal systems in Zacatecas and the neighboring states of San Luis Potosí and Guanajuato that include the Fresnillo, Real de Angeles, Guanajuato, and Cerro de San Pedro districts. The region enjoys a long history of mining and mineral development and the mining industry is recognized as being integral to its economy.

Historical records indicate that Spanish prospectors discovered gold and silver in the Pinos area in 1575, and that mining was sporadic until the late 1800s, when British interests produced an estimated 5 Moz of gold and 25 Moz of silver from the district. Most of the extensive British underground workings stopped at the water table around 100 metres from the surface, with some workings reaching 290 metres depth. Mining activities at Pinos stopped during the 1910-1920 Mexican Revolution. Since the Revolution, exploration and development has been intermittent, with increased activity since 1975 including exploration programs conducted by Bethlehem Steel, Peñoles, Minera Apolo, Hecla Mining, Romarco Minerals.

Qualified Person: Mr. Stephen R Maynard, M.S., C.P.G., has acted as the qualified person as defined in National Instrument 43-101 for this disclosure and supervised the preparation of the technical information in this release.

ON BEHALF OF THE BOARD

The TSX Venture Exchange does not accept responsibility for the adequacy or accuracy of this news release.

Forward Looking Statement: Some of the statements contained in this press release are forward-looking statements. Forward-looking statements are not historical facts and are subject to a number of risks and uncertainties beyond the Company's control, including, but not exclusively, statements regarding potential mineralization, exploration results, completion of work program and studies, and future plans and objectives of the Company. Resource exploration, development and operations are highly speculative, characterized by a number of significant risks, which even a combination of careful evaluation, experience and knowledge may not eliminate, including, among other things, unprofitable efforts resulting not only from the failure to discover mineral resources but from finding mineral deposits which, though present, are insufficient in quantity and quality to return a profit from production.