The Caballo Blanco project is located at the intersection of the Trans-Mexican Volcanic Belt (“TMVB”) (at its eastern extremity) and the NNW-SSE trending Eastern Alkaline Province. Regionally the area is located over a tectonic high known as the Teziutlan Massif, which has a Palaeozoic (metamorphic-intrusive-metasedimentary) basement. This massif divides the Tampico-Misantla Basin and the Veracruz Basin, respectively to the north and south.

The TMVB has been defined as a continental magmatic arc formed by more than 8,000 volcanic edifices and a few intrusive bodies that extends from the Pacific to the Gulf coast in Central Mexico (1,000 km long and up to 230 km wide), with a general E-W orientation. The TMVB is controlled by a complex extensional tectonic regime, whose volcanic products are underlain by basements with widely different ages, compositions, and thicknesses. Calc-alkaline and alkaline rocks are distributed all along the TMVB; however alkaline rocks (Na-K) tend to be more abundant at both the west and east ends of the TMVB.

The Eastern Alkaline Province (EAP) was considered as an independent Cenozoic magmatic province with alkaline rocks, related to extensional faulting parallel to the Gulf of México coast, extending from the state of Tamaulipas in the north southward to the Los Tuxtlas Range in the State of Veracruz. The volcanism near the Caballo Blanco project area is linked to the evolution of the TMVB. Several geological episodes have been distinguished during the time evolution of the TMVB.

The intrusive rocks are described as micro-porphyritic to microcrystalline (hypabyssal), found with sulphides, propylitic alteration and normally cut by mafic dikes. This initial phase of magmatism in the area resulted in some products being emplaced to the east within the present Gulf of Mexico. 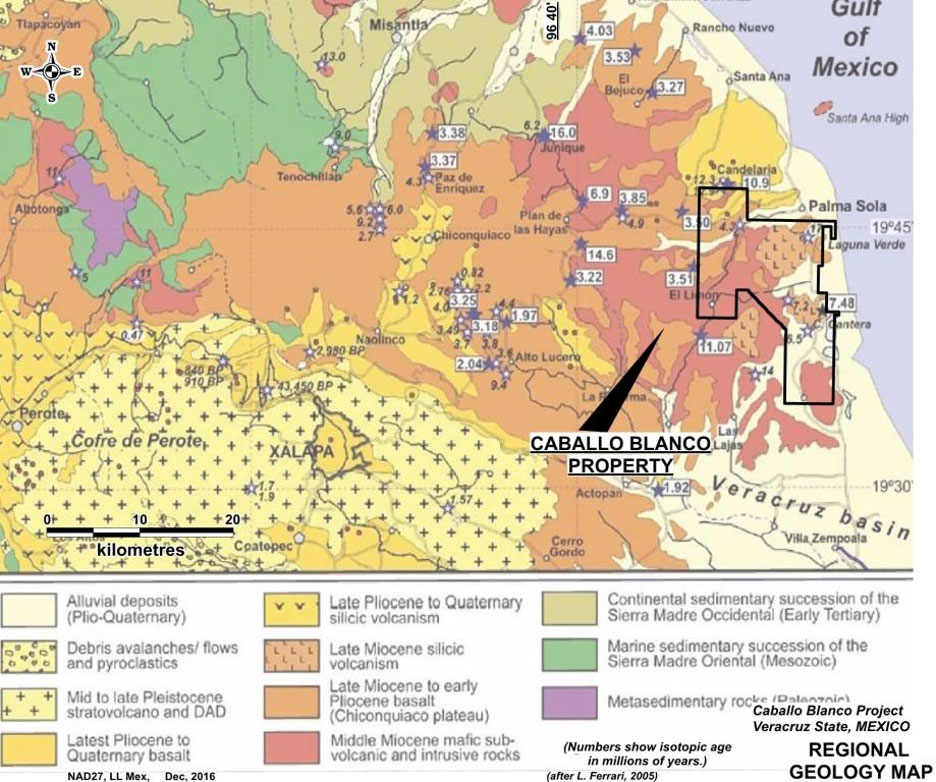 The Caballo Blanco property lies at the eastern end of the TMVB and is underlain by sub-aerial basalts, andesites and diorite dykes of Miocene age that are in turn covered by a sequence of felsic quartz tuffs, andesitic ‘dome’ complexes, volcaniclastics and younger intrusive dacitic plugs. Capping the volcanic package are Pliocene alkaline basalt flows that are commonly well preserved as small flat highland plateaus.

A significant volume of prior work has been completed on the Caballo Blanco property:

Work on the original Caballo Blanco property had outlined at least three large areas of interest since the initial discovery of gold at the Highway Zone in 1995. In the north and central part of the property, two large areas of high-sulphidation epithermal alteration have been discovered, locally named the Northern Zone (4 by 5 kilometres in area) and the Highway Zone (4 by 2 kilometres in area). In the southwest of the property and currently not part of the CMC claim holdings, the Central Grid area hosts what is believed to be at least two porphyry copper-gold prospects (Pedrero, Porvenir). These two porphyry prospects likely formed similar ‘high level’ argillic and silicic haloes and caps to the Northern and Highway zones. The degree of erosion here is deeper, and likely reveals the underlying porphyry intrusive plugs with stock-work copper-gold mineralization and associated alteration in the host rock.

From 1995 to 2005 Almaden Minerals Ltd, Noranda and Comaplex Minerals (all through Minera Gavilán) conducted a variety of surveys including an airborne magnetic / radiometric survey in 1997 (by Aerodat), extensive geochemical soil and rock sampling, induced polarization resistivity and chargeability (by Marc Beaupre Geophysics) and detailed geological mapping surveys (in house consultants). Follow up on anomalies developed from these surveys led to the drilling of 34 holes (6446 meters) in all three areas described above. Contractors for this drilling were Minera Gavilán and Energold de Mexico.

More recently from 2006 to 2009 Canadian Gold Hunter through Candelaria Mining completed an aerial photographic survey on the northern two-thirds of the Caballo Blanco property and during 2008, the geophysics department of the Servicio Geológico de Mexico (SGM) completed a helicopter-borne magnetic and radiometric survey (60-meter instrument terrain clearance) over the northern half of the property. The survey overlapped by three kilometres an earlier airborne magnetic, and radiometric survey completed by Aerodat over the southern half of the claims from 1997. CMC continued to collect soil and rock samples and improve upon previous geological mapping that now covers most of the property area.

Geological mapping, rock chip sampling, geophysical surveying and core drilling identified a large area of silica and associated silica clay alteration within an andesitic dome complex along the northern portion of the property. Altered feldspar andesites that host gold mineralization are spread over an area of 5 by 4 kilometres and occur in close association to a prominent magnetic ring structure with at least five prominent silica caps forming distinct 600-meter-high hilltops. Rock exposures in these areas include mixtures and overprints of classic vuggy, brecciated and or massive silica with associated and flanking haloes of advanced argillic to argillic alteration. These diverse clay alteration zones have been identified and mapped in part using a TerraSpec® spectrometer. Drill testing at three of these ‘silica cap’ features, La Paila, Bandera and La Cruz, suggest that acid leaching from hydrothermal fluids extend to depths of over 300 meters. The Red Valley target lies at lower elevations on the outside fringe of the circular ring feature and has been identified with soil geochemistry.

Gold mineralization at La Paila is very fine and occurs within vuggy and brecciated silica alteration of the original andesitic flows and domes. The resource is clean and has little if any mercury or arsenic signatures. 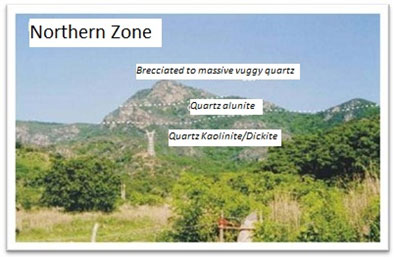 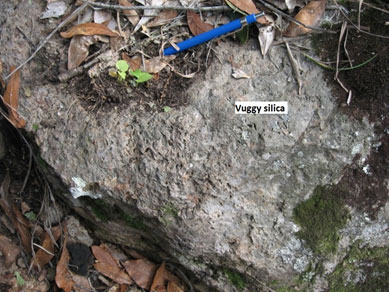 This area is roughly 3 kilometres by 4 kilometres in size and is located along the eastern edge of the Caballo Blanco property where road cuts for the Pan American Highway first exposed strong argillic alteration and small quartz veins that form part of the original discovery in 1995.

Alteration of the local dacitic tuffs and volcaniclastic host rock is very similar to the Northern Zone. Various geophysical and geochemical surveys suggest that high resistivity anomalies combined with extensive silica and silica-clay alteration coincide with the inner ‘haloes’ of a high-sulphidation epithermal system.

Several areas of vuggy silica alteration have been identified by geophysical and geological means in the southern area of the Highway Zone however the area is large and remains a valid exploration target for the future. 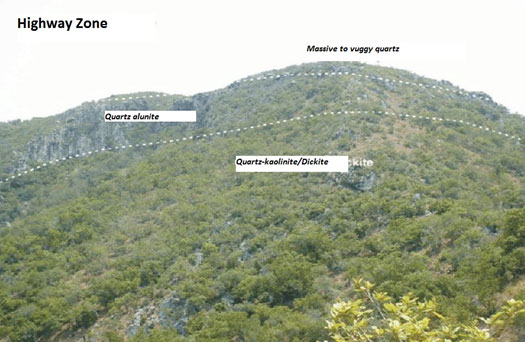 In the Northern Zone and Highway Zone, gold mineralization is associated with vuggy silica breccia surrounded by large and distinct haloes of various mixtures of clay alteration including alunite, dickite, and pyrophyllite. The elongate and silicified gold rich mineralization at La Paila likely formed from fluid rising along a north trending fault structure well above a deeper intrusive ‘heat source’. It is interesting that similar silica and clay alteration zones and or soil anomalies have been recognized at La Cruz, Red Valley and Highway Zone, all of which lie along a north-south linear trend greater than nine kilometres in length. 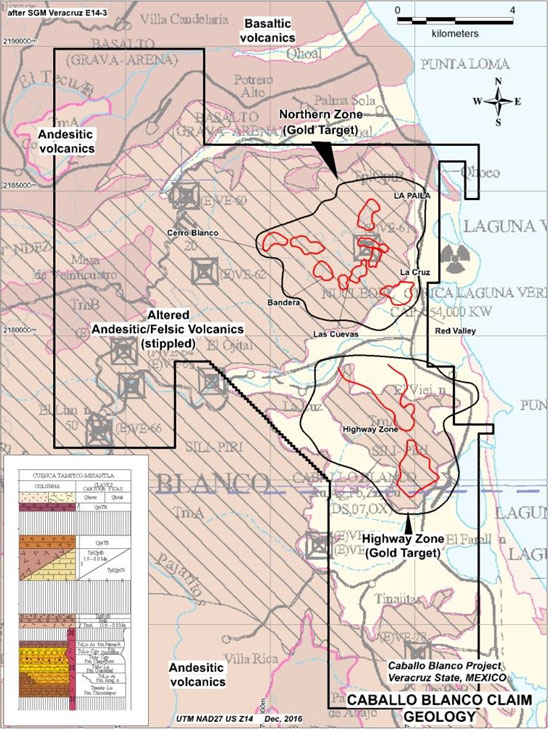 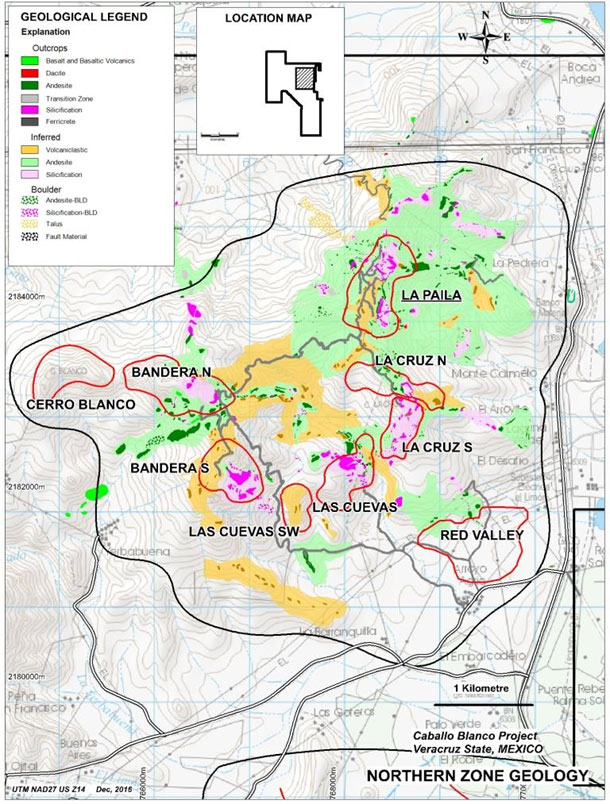 The Caballo Blanco property and the neighbouring El Cobre property includes at least two distinct deposit types, defined as high-sulphidation epithermal gold and porphyry copper-gold respectively. The Central Grid Zone (Porphyry) is located to the south of the Caballo Blanco Property and was part of the El Cobre Joint Venture between Almaden Minerals and Goldgroup in 2010 before the company transferred its 40% remaining interest back to Almaden. 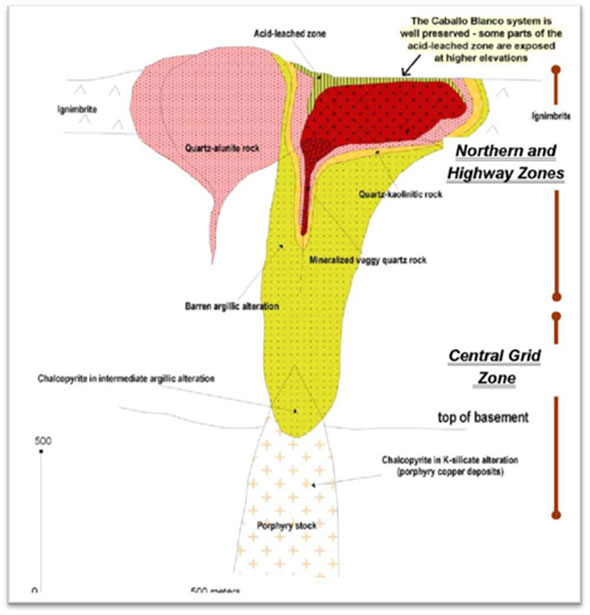