La Paila is the most advanced project in the Caballo Blanco licence area, the fully oxidised mineralised body being exposed at surface and subject to the majority of the past resource definition work. A PEA was completed by Goldgroup in 2012, and this envisioned an open pit / heap leach operation producing 100koz of gold per year over a 7.5-year mine life.

A variety of companies have conducted work in and around the area since the mid-1990's, including Almaden Minerals, Noranda, Comaplex Minerals, and Canadian Gold Hunter.

Goldgroup Mining Inc. through an option agreement with NGEx drilled a total of 42 core holes, concentrating primarily on testing for epithermal gold mineralization at La Paila, Bandera and La Cruz areas in the Northern Zone as well as testing for porphyry mineralization twelve kilometres to the southwest at Pedrero and Porvenir areas in the Central Grid Zone.

In 2012 Goldgroup also developed a 123-meter-long 3m x 3m underground access route into the north central portion of the La Paila mineralized body. This was a portion of the planned underground development at the time, designed to give more detailed geological information on mineralization controls and to provide more material for large-scale column leach tests.

Timmins Gold acquired the Caballo Blanco licence area in 2014, but little work was completed until Candelaria acquired the Caballo licences in 2016. In 2017 the Company published an updated pit-constrained compliant Mineral Resource for the La Paila project (NI43-101 Technical Report, April 2017), and undertook further target development works throughout the licence area. 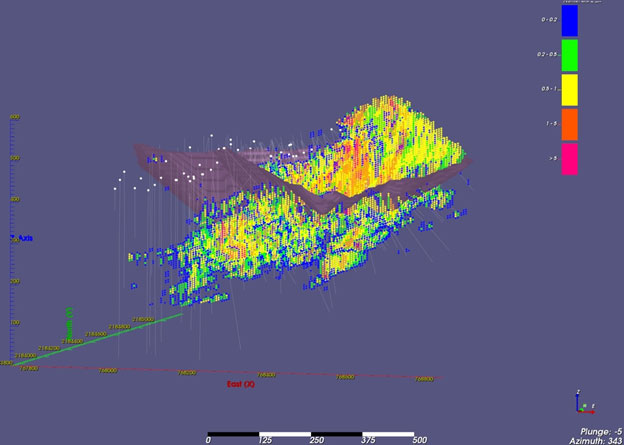